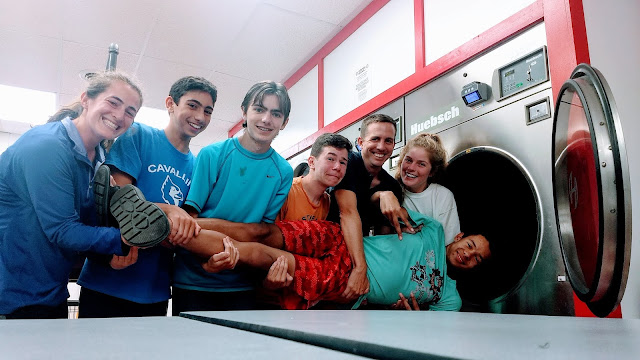 We started our day by waking up, in what was basically a sauna (aka our tents in direct sunlight). Then we made breakfast and ate on a porch. After that we biked to Stewart's for some ice cream. Stewart's receives a 6 out of 10 for style because it wasn't styled like an ice cream shop, it was more like a Cumberland Farms. Taste was an 8 out of 10. Variety of ice cream was an 8. Accommodations/seating was a 5 (not very many seats). Location is an 8 (because it was not at the bottom of massive hill). Overall, the shop received a pretty good review, warm recommendation to all, especially if you need gas. On a massive hill sometime after, Erik hit a group record speed of 50.3 kph (31 mph), surpassing Adam's record of 28.7 mph. We ended up eating lunch outside of a library (or liberry). After that we were halfway to Albany when Liam dropped his milk carton and everyone immediately stopped to pick it up. We arrived at the Holiday Inn Express and went to the pool, and then we decided to allocate more time to the showers so Liam had to shower after dinner. Then we went out to the laundromat. Then we after that we got pizza. Overall, the apoapsis for today is that we will be sleeping in an air conditioned room, and today's periapsis was getting scolded in the library. Overall a pretty good day, was mostly met with a warm reception.
-->Teen Thrifter Adam