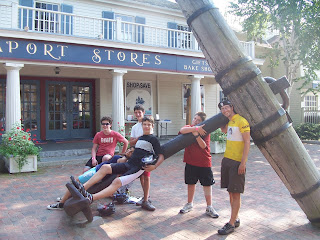 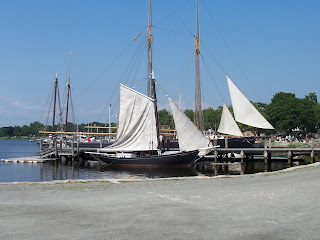 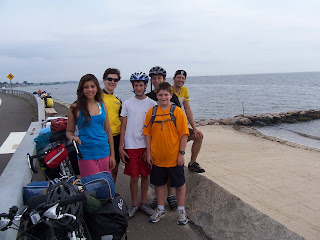 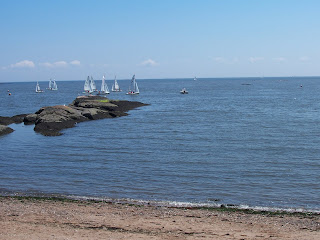 with over five hundred thirty (written out, it emphasizes the length of our journey, but if you'd rather, 530+) miles clocked on our odometers we rolled into town, wiped out and glistening with ethereal ooze -or maybe that was just sweat?

Mike has volunteered to catch us up:

The day after Mariel's house in New City, we traveled to Fohnstock State Park. We had to bike uphill for 5 miles after doing 38 miles that day. A ranger hooked us up with a sweet cabin that protected us from the terrible rain the next morning. After dealing with more flats in the rain the next morning and waiting for the rain to stop, we eventually left and got to spend the next night at Mariel's old college, Vassar. We slept in a lounge in a dorm and got a tour of the school. The next day we biked 50 miles while food committee biked 66 miles (Noah, David, and Bryan). We slept in a fruit farm (Smith's Farm) surrounded by ripe raspberries and peaches which we picked ourslves. It was nice to get clothes washed and we went out to dinner for Raphi's birthday at a chinese restaraunt across from the comfortable motel.

picking up where mike left off...

the children have been mutineering. apparently 6 meals, 8 snacks, and 14 desserts per day isn't enough to stave off the abyssmal hunger that is the product of these painfully long days of riding. and boy were they painful. but sunshine and friendly cows in vermont helped to subdue the saddle-sores and sun-burns. the group's navigator, who shall remain nameless, has lead us into some sticky situations... one of these being a railroad causeway that shot for miles out into the champlain lake that suddenly reached a disconnect. at their rope's end for not three minutes before some friendly french-canadian boaters boarded those teen-trekkers and ferried them across the water. swimming followed. all that was lost were anna's sunglasses and (don't ask me how) noah's shorts. What turned out to be a false alarm, our 'budget crisis' resulted in tightening our belts and working out the kinks in a flawed system of group food shopping and cooking, and the group pulled together in a new, more efficient way. blah blah blah, you just want to know wether we survived that damn Vermonster or not. The truth is, that ice cream didn't stand a chance against these kids. Mariel and I could barely get our spoons within homing range of that thing for fear of friendly fire. We gardened botanicals and pancaked at the hostel today. Tomorrow brings more adventure, back in new york the following day.

Your kids will be happy to fill you in on the details I've forgotton on this page, including all the times we nearly died. I'm sure they will tell you how horrible this experience has been and how they never want to do this sort of thing again, which is fine with me, because, frankly, I can't stand them anymore. 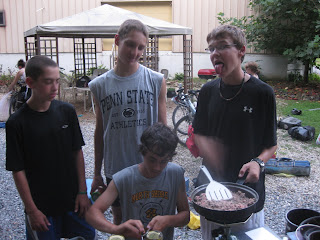 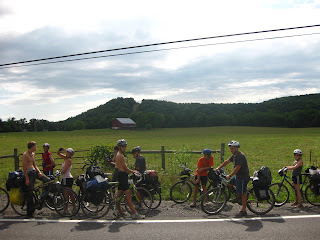 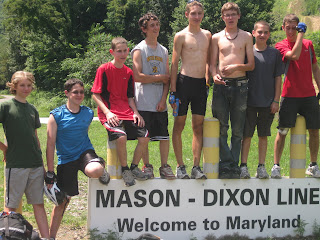 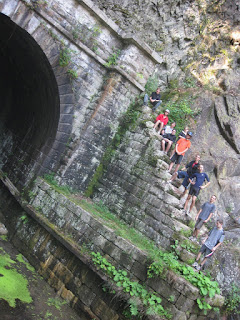 Hi all! Everything is great here! We've been enjoying wonderul warm weather and are now in the state of Rhode Island. Block Island is beautiful. We've spent some time on the bluffs enjoying the amazing views, on the beaches and walking around the small, quaint town. We're thinking of taking in a movie tonight since it's a little rainy right now (first day of rain yet!) and then taking on a Ben and Jerry's "Vermontster". I have no doubt that this group can handle it! I'm also happy to report that we've have zero flat tires and zero major bike issues. It's really been smooth sailing! The first few days we encountered a few hills, but the group took them on like champs! Very proud of them. Mystic Seaport was a lot of fun too. We got to swim in the hotel pool after a long, hot day of biking, visited the Mystic Seaport Museum and had some ice cream by the drawbridge. I can't believe we'll be in Providence in only 2 days. We're super excited! Pictures soon to come.

PICTURES! A few highlights from the trip so far... 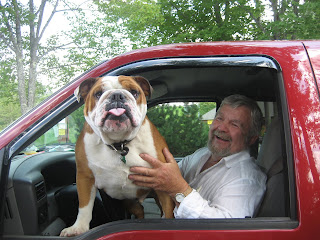 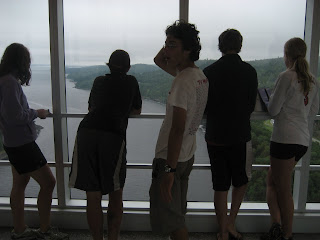 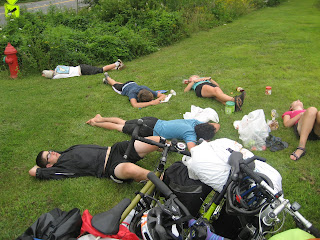 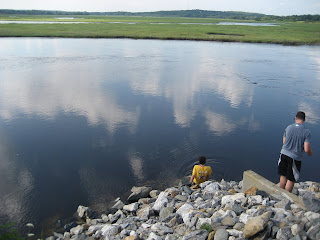 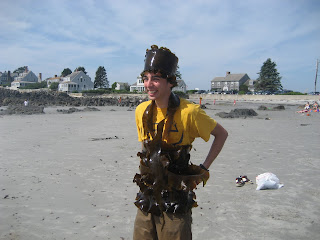 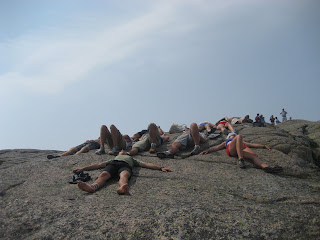 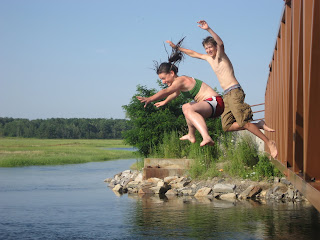 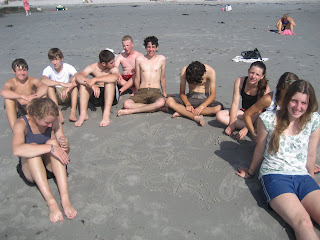 We've made it to Bar Harbor, ME and early too! We spent our last night in tents at the Bar Harbor Campground and are now checked into the Bar Harbor Hostel. The past few days of biking was rigorous, but it's a nice feeling having reached our destination after all of that hard work. We're exploring the town of Bar Harbor this morning which is perfectly situated on the Frenchman Bay. This afternoon we're doing some sea kayaking and the next two days in Bar Harbor will be spent in Acadia Park, hiking Cadillac Mtn. and hopefully exploring the islands off of Mount Desert Island.

Last night we rewarded ourselves with a tasty dinner and tons of ice cream in Bar Harbor. We're excited to have some time on foot and on bikes without gear! Pictures are coming as soon as we can get our hands on a camera cord and some free internet time!

En route to Bar Harbor, we went up to the observatory in the Penobscot River Bridge (one of the few observatory bridges in the world!), found swimming spots (rivers and frigid ocean water), and quaint coffee shops and stores. More to come!
Posted by Teen Treks at 10:25 AM 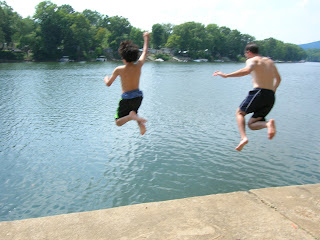 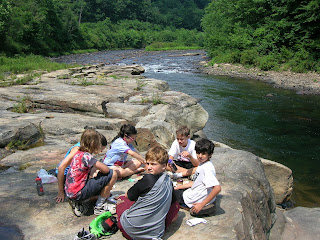 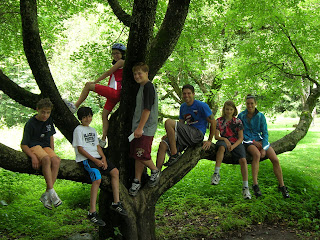 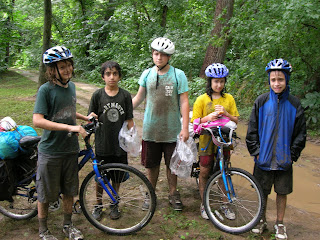 So, change of plans, we arrived in DC a day early. As I am sure you parents know, we rode our bikes 67.09 miles through down pouring rain, and mucky roads, it was a blast (see picture)! It was a unanimous decision to continue pas our planned site in order to avoid a wet and muddy set up and take down. Counselor Bonnie was extremely generous in letting us spend the night at her place since we did not have hotel reservations for that night. while there we were also blessed with the company of her husband Alex and dog Sidney who enjoyed getting up at all hours of the night to lick our faces. So far we have done a few monuments and museums with more fun to come. We are coming close to our closure and are sad to leave, yet anxious to get home and see our families.
Posted by Teen Treks at 7:59 AM