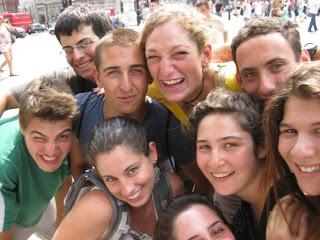 July 1st, 2008 – Heathrow Airport. A group of 8 strangers was seen carrying large brown boxes through Terminals 3, 4 and 5, followed by two harrowed looking adults wearing white t-shirts. Airport workers and nearby security did not know quite what to make of them as they set down their boxes, pulled out screws and metal tubing, and began to build what would be their way of life for the next 30 days….BICYCLES! Little did anyone know, these strangers were about to embark on the adventure of a lifetime - becoming close friends, eating foreign foods, and experiencing life the European way.

Our time in England was mainly spent eating bangers and mash, playing HEY SHEEP!, visiting such magnificent sights as Stonehenge and Windsor Castle, trying out our (unconvincing) English accents to try to fool people in the grocery store, hiding from the rain, and biking the many challenging hills throughout the beautiful English countryside. We caught a ferry to France and biked all the way from Le Havre to Paris - crossing the Normandy Bridge, stopping in the beautiful port town of Honfleur, traversing the French countryside, seeing Monet's garden in Giverny, watching the Festival of Lights at the Cathedral of Rouen, chillin' with Louis at Versailles, and arriving in Paris on the eve of Bastille Day. Once in Paris we cultured ourselves by visiting art museums, eating escargot at a fancy (and very eventful) dinner, shopping, and watching the fireworks over the Eiffel Tower. A slightly stressful train ride later, we were exploring Belgium and stuffing ourselves with chocolate before heading onto Amsterdam, where the people are crazy and the bikers don't stop. We saw museums, the Anne Frank House, took a tour of the city, and Jenny took the group for their first clubbing experience. A week later, we were sad to say goodbye to the beautiful, flat Netherlands but excited to sail back to England to bike to Cambridge, (where we went punting and saw a Shakespeare play) and our final destination – London! The week passed by in a flash of shopping and exploring the famous London sights, and before long we found ourselves back in Heathrow, promising to keep in touch and wondering where the time had gone. A month earlier we had arrived carrying only bikes and saddlebags, but we left with a lifetime supply of new friends, rain, and great stories.
~ Jenny O'Connell, Leader
European Phantom Trek
Posted by Teen Treks at 12:12 PM