Story from a great Leader 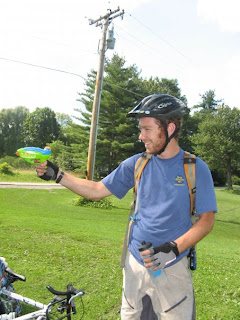 The NYC-Montreal trek was a challenge from the start as we encountered some big hills just north of the city. The group barely blinked, though, and I knew immediately that I was dealing with some strong kids (not just in the legs, but in their characters). One of the highlights of the trip for me was the night we spent in Rhinebeck, NY. That day we had visited the FDR house in Hyde Park, and after a tour of the facilities the group decided they wanted to do an extra 15 miles and cut some miles off the next days schedule. So on the group's request I did a bit of research and found an old grass airstrip which exhibits old WWII planes. We spent the night there amidst some pretty incredible antique planes including the oldest flying plane in America! The next morning we were awaken by a downpour, but it wasn't very successful on dampening or spirits, just all our gear! While we were waiting out the rain, the delivery truck came by and gave us a few boxes of donuts, and the director of the airfield gave us a grand tour of the planes.
This trip was an amazing experience for me as I'm sure it was for the other trippers as well. I truly admire all the kids that did this trip, as they took on incredible responsibilities and achieved monumental feats. I cherish all the memories that I've shared with them and I hope that all the trippers "keep on keepin' on!!!"
Peace,
Jesse

NYC-Montreal Trek
Posted by Teen Treks at 10:20 AM