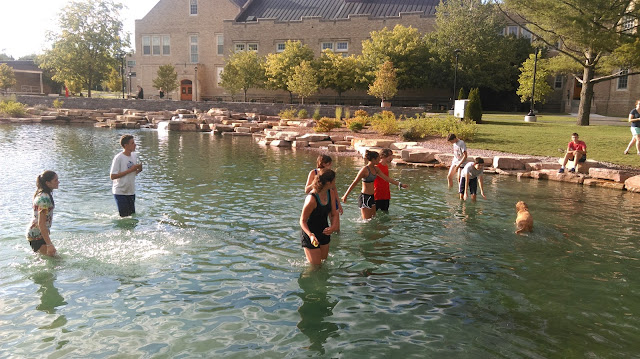 Traveling to Plattsburgh was quite a day.  Leader Andy was excited to show the Trekkers where he went to college, SUNY Plattsburgh.  Our route consisted of a beautiful causeway to get to a bike ferry, and seeing a forest full of colorful birdhouses on Grand Isle, the island in between Vermont and NY on Lake Champlain! Technically the island is Vermont though. We the took another ferry off that island to Cumberland Head where our campsites were. After eating at Gus' Red Hots, a favorite hometown diner right next to campsite, the trekkers departed to the campus.  We were quickly enthralled by the fountain... Enough to want to go swimming in it! After that, we took some much needed time indoors relaxing at leader Andy's college friend and colleague Jean's house, watching "The Truman Show" a movie starring Jim Carrey.